Mechanisms of presynaptic plasticity and tenacity

Chemical synapses are specialized sites of information exchange between neurons and their target cells. At the synapse the arriving electrical signal is rapidly and efficiently transformed into a chemical signal through regulated exocytosis of neurotransmitter-filled synaptic vesicles. The fusion of synaptic vesicles with the presynaptic plasma membrane is under tight temporal and spatial control as synaptic vesicles only dock, fuse and release neurotransmitter at a restricted and highly specialized area of the presynaptic plasma membrane called the active zone. The active zone is tightly associated with an electron-dense cytoskeletal matrix, which is referred to as cytomatrix at the active zone (CAZ) or presynaptic grid. The protein network that constitutes the CAZ is integrally involved in the organization of docking and priming of synaptic vesicles. In addition, the CAZ might underlie the long-term stability of individual synaptic sites but at the same time mediate use-dependent changes in release during short- and long-term synaptic plasticity. Alterations in synaptic properties and numbers have been suggested to constitute a fundamental mechanism for modifying functional properties of neuronal networks and thereby contributing to phenomena like learning and memory. On the other hand, numerous studies published in recent years have linked synaptic dysfunction and particular components of the presynaptic release machinery to pathophysiological conditions, e.g. epilepsy or other psychiatric and neurological diseases. Our group is interested in the molecular mechanisms of presynaptic plasticity and tenacity under physiological and pathophysiological conditions.

Role of RIM3γ and RIM4γ in dendrite morphogenesis and synaptic transmission 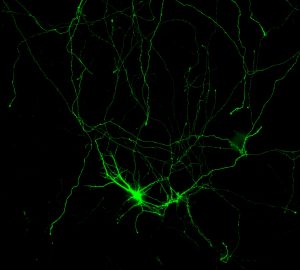 The correct arborization of neurons is the foundation of the development of neuronal networks in the brain. Neurite growth, both the formation of the axon and the establishment of the dendritic arbor, requires the continuous addition of enormous amounts of membrane that must be specifically accumulated to generate type-specific dendrite morphology. New membrane is synthesized by the secretory pathway and delivered to defined sites by regulated vesicle fusion with the plasma membrane. To ensure the correct generation and maintenance of the neuronal arbor the process of neurite outgrowth has to be temporally and spatially controlled. However, even though a large number of molecules have been identified to be important for arborization the molecular mechanisms mediating the temporal and spatial control of this process have not been resolved so far. Recently, we found that RIM3γ and RIM4γ, the small members of the “Rab3 interacting molecule” protein family, are essential for the development of a normal neuronal arborization and spine development/synapse density, both in vitro and in vivo. The large RIM proteins, RIM1 and RIM2, play an important role in the docking of SVs and in the regulation of the fusion reaction as well as in presynaptic forms of plasticity. Currently, we are investigating the molecular mechanisms through which RIM3γ and RIM4γ contribute to this process and if RIM3γ and RIM4γ also play a direct role in controlling synaptic transmission. 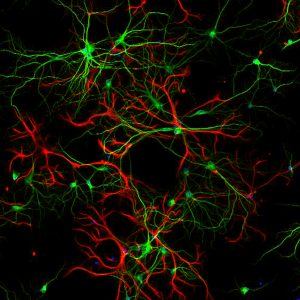 Brain insults like status epilepticus trigger endogenous signaling cascades that either contribute to the development of an epileptic brain or try to counteract the consequences of the insult. In recent years progress has been made in identifying transcription factors that constitute the first response wave. However, the downstream effectors that are induced/repressed by these transcription factors are still largely unknown. Understanding these signaling networks will be highly relevant for the identification of biomarkers and the development of novel treatment approaches. In collaboration with Albert Becker and Karen van Loo.